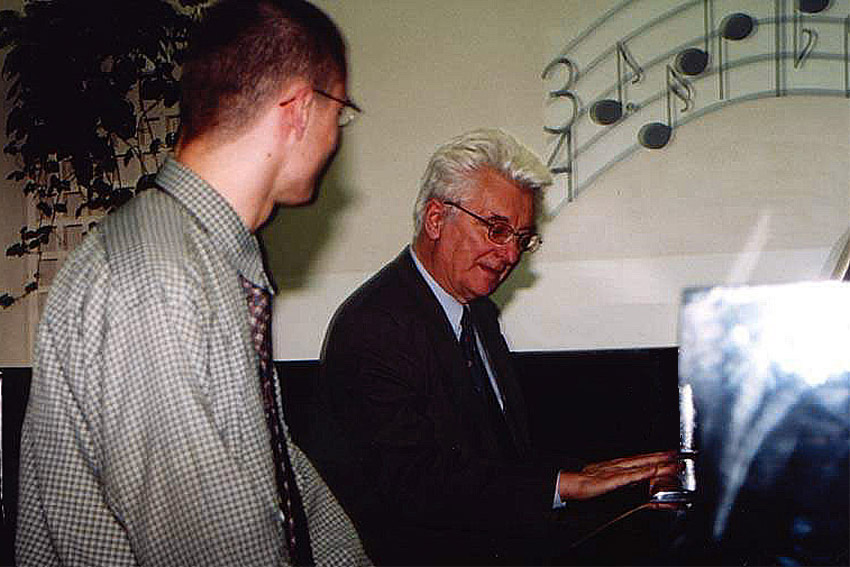 In 1959, still as a student, begun his pedagogical work in the State Higher School of Music in Katowice, where directly after graduation was employed. In 1967 was offered position of assistant at the Department of Piano, then after first degree qualification in 1969 became an assistant professor. Between 1971 and 1979 worked additionally at the State School of Music in Bytom to enrich his pedagogical experience. In 1972 designed, organized and became manager of famous holiday camp for young pianists in Nysa. Approximately 30 participants attended the camp – pupils, students and graduates of schools and universities from Bytom, Opole, Nysa, Gdansk and Katowice. Prof. Andrzej Jasiński and Prof. Jerzy Sulikowski joined its faculty. The form of the camp, program of classes, participants and disinterested contribution of work by its faculty was unique to national scale. Similar camps were repeated in the same shape in 1973 and 1974. Among participants of that camp were presently well-known pianists, among others Krystian Zimerman, Ewa Pobłocka and Eugeniusz Knapik.

In 1973 Czeslaw Stanczyk organized work of the Pedagogical Studium at the State Higher Music School in Katowice and was its manager from 1973 to 1981. Between 1977 and 1979 was also a manager of the Overal Piano Didactic Team. 1975 made 3-months long internship in piano class of Prof. Vladimir Natanson at the Tchaikovsky Conservatory in Moscow, where he attended classes of numerous outstanding personalities of piano pedagogy – Zak, Bashkirov, Milstein and Naumov. He was working with his piano repertoire with them, additionally attended lectures at the Qualifications Improvement Faculty. In 1976 actively attended Bartok Seminar in Budapest. In 1978 after qualification at the Academy of Music in Kraków received rank of an associated professor and in the academic year 1980/81 was nominated for this position. Between 1981 and 1983 worked in Hochschule für Musik und Darstellende Kunst Mozarteum in Salzburg (Austria). In 1984 became a Dean of the Instumental Department, than again – for the second term of office – in 1987 and took this position till 1991. Between 1988 and 1993 full-time worked in the Higher Pedagogical School in Czestochowa. For one academic year 1993/1994 was a Head of Piano Chair at the Academy of Music in Wroclaw. In 1999 additionally begun working in the Mieczyslaw Karlowicz Music Lycee in Katowice. During last years he was working as a piano professor at the Ostrava University (Czech Republic) as well.

Since over 30 years consults Polish music schools, gives lectures, seminars for students and teachers, attends jury panels of diverse piano competitions, both national and local. During last years has repeatedly been memeber of the jury in the Piano Competition organized by the Fryderyk Chopin Society in Warsaw, Chopin Competitions in Antonin and Szafarnia, Polish Competitions organized by the Artistic Education Center as well as in Piotrkow Trybunalski, Plock, Bielsko-Biala and many others. Many times was chairman of juries at mentioned competitions. He is a lecturer at the summer courses for young pianists in Warsaw (Warsaw Piano Workshop), Bystrzyca Klodzka and Lublin. Together with Pawel Skrzypek was lecturer and co-organizer of the Podlasie Musical Meetings in years 1998-1999. He lead masterclass in Croatia – in Zagreb, Dubrovnik, Split and Rijeka. For several years has been member of the Program Council and Jury of the Young Scene of the Polish Piano Festival in Slupsk. For many years he was also a consultant and expert of the Ministry of Culture, working in commissions awarding qualifications for teachers of first and second degree music schools. In that time – as a chairman of the commision created by the Artistic Education Center – prepared piano curricula for first and second degree music schools in Poland. He has been invited more than twenty times by Academies of Music in Warsaw, Katowice, Kraków and Poznan as a reviewer of first and second degree qualifications of academic teachers. Between 1989 and 1992 Pawel Skrzypek was – till his first degree qualification – an assistant at the Academy of Music in Katowice under protection of Prof. Czeslaw Stańczyk.