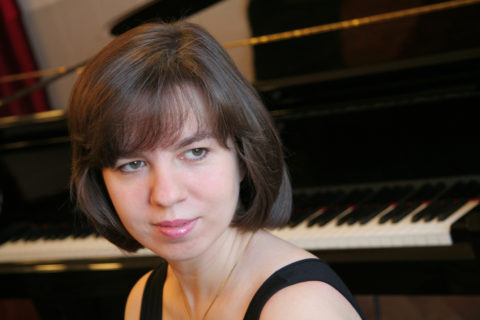 Joanna Marcinkowska graduated with honors from the Ignacy Jan Paderewski Academy of Music of Poznań in the class of Prof. Waldemar Andrzejewski, whose assistant she subsequently became. In 2014 she was conferred the academic degree of PhD Hab. of Musical Arts and from 2016 she is a Professor at the Department of the Pianoforte of the Academy in Poznań. She is a leading Polish pianist of the younger generation.

She has taken part in numerous prestigious piano festivals in Poland and abroad. She gave recitals and performed as a soloist with symphony orchestras at International Chopin Festivals in Duszniki-Zdrój (1997, 2000), Antonin (Chopin in the Colors of the Autumn 1996, 2012, 2016), Vienna (1999), in Salzburg at the famous Mozarteum-Saal (1999), Gaming (1997), at the International Festival Eminent Winners of Piano Competitions in Hanover (2002), at Festivals of Polish Piano Music in Słupsk (1996, 2000, 2004, 2007, 2011, 2013, 2016), the Paderewski Festival in Warsaw (2014), the Festival Paderewski Days in Kąśna Dolna, the Festival Music and Visual Arts in Lublin, the 1st International Artur Rubinstein Festival in Łódź (2008), the 1st Chopin Festival Chopiniada at the Little Philharmonic in Puszczykowo, the 2nd Musical Festival Barbakan in Kraków (2009), the Festival The Stars Promote in Jelenia Góra (2010), the Festival Piano Passion in Saint-Étienne (2010), the Festival Frederic Chopin Spring in Gliwice ( 2012 ) and the Witold Lutosławski Festival in Szczecin (2000); at the latter event she gave the première performance of the 4th Piano Sonata by the Poznań composer Mirosław Bukowski. In 2002 she gave recitals of pieces by Karol Szymanowski at International Musical Festivals in Sofia and Plovdiv (Bulgaria).

Joanna Marcinkowska has recorded compositions by W. A. Mozart, J. Haydn, R. Schumann, F. Chopin, I. J. Paderewski, P. Czajkowski, C. Debussy and K. Szymanowski, released on compact disks and cassettes. The television programs in which she has performed include a recital of music by Chopin, recorded on the 187th anniversary of the composer’s birthday. She has also recorded a program of Chopin’s music for Radio Merkury.

She sits on the jury of competitions and conducts piano master classes at home and abroad. In 2009, she conducted a two weeks’ Master Piano Class at the Central School at the Conservatory of Music in Beijing. She also gave a special piano recital in that city.

Joanna Marcinkowska has earned the Medal of the Young Arts, awarded to Poznań artists of the young generation for outstanding achievements, and the Hipolit Cegielski Medal of the Young Positivist for successful organic work, the Bronze Medal for Long Service and the Merit to Polish Culture honorary distinction. Furthermore, on numerous occasions she has been granted artistic scholarships of the Minister of Culture of the Republic of Poland and the Fryderyk Chopin Society of Warsaw, as well as those of the City of Poznań and the Marshal of the Province of Greater Poland. In 2013 she received the Artistic Award of the Marshal of the Province of Greater Poland and in 2015 the Rector Award of the Academy of Music in Poznań.