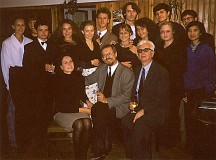 Warsaw Piano Workshop belongs to the biggest and the most intensive international piano master courses in Poland. Its roots reach 1998 when two professors of piano – Pawel Skrzypek from Warsaw and Czeslaw Stanczyk from Katowice – established the prototype workshop in Radzyn Podlaski in Eastern Poland. That experimental course was named Podlasie Musical Meetings, lasted two years and after the second edition, was moved to Warsaw as a new educational enterprise. Here in Warsaw the course was located in its final destination – the Frederic Chopin State School of Music – got the name Warsaw Piano Workshop and from year 2000 started to grow and develop reaching today’s status and position. Areas, that distinguish the Warsaw Piano Workshops among other instrumental music courses beside of its size, professional value and effect in musical education, are its program and organization – both closely related to each other. The program of Warsaw Piano Workshop, underlying the superior ideology of the course, determines organizational principles.

Before describing details of the Workshop ideology and presenting particulars of its unique character – an important issue connected with the market value of music courses and their concrete effects should be brought up. In case of the Warsaw Piano Workshop the isuue concerns Workshop’s Faculty.

Situation existing nowadays, in which the music education is so closely related to music competitions, creates an understandable need to see competition judges as members of piano courses teaching boards. In effect an international group of adjudicators faces hundreds if not thousands participants of their master courses. Such numbers simply make more detailed work with an individual impossible and are obviously attributable to vague statements about individuals’ interpretation. It is common that participant of a renowned music course taught by famous tutor-adjudicator has opportunity to work with such teacher only once or twice during the whole event. In addition such artistic level of a course requires pieces perfectly prepared for presentation, usually – even for a competition performance. In such situation not much can be done as far as improvement is concerned. Participant is able to get just an impression of tutor’s taste and just a very limited perspective of his views.

In contrary and somehow on the other side lies a detailed work on a relatively new repertoire, on pieces liable to changes, when the details can be shaped and repeated during a cycle of lessons. Here the level can be different, perhaps artistically somehow lower, while the effects of work can be much more concrete and substantial. Therefore the problem concerns a difficult balance between the market value and the amount of detailed, effective work given. In the first case a participant is focused more on views and expectations of his future adjudicator, while in the second case more on details of interpretation and progress of his repertoire.

The Warsaw Piano Workshop belongs to the second category, however its Faculty includes also experienced competition judges as its members. 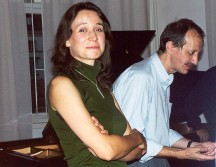 The character of a course, deciding on its category, depends mainly on its rules. The rule of working on three pieces of participants’ repertoire, with three lecturers, in three cycles of three lessons each, is the Warsaw Piano Workshop’s fundamental assumption. This principle opposes a widely accepted rule seen at other courses that assigns a participant to just one of lecturers, what creates kind of a class. Such practice favors consolidation and deepens a habit of the „closed class”. In result it divides participants of a course into groups working under separate teachers. Membership of such somehow group defines the status of a participant, which depends on name of the teacher working with a group. Such situation still lingers on in the musical education. In the Warsaw Piano Workshop every participant, works with three lecturers what prevents division. It gives him a chance to gain much wider experience. The repertoire assignment to lecturers additionally prevents the occurrence of different, often contradictory views on the same subject. More about the fundamental principles of the Workshop can be learnt from the page ORGANIZATION of this web site.

As it is mentioned in the HISTORY of the course – the basis of Regulations of the Warsaw Piano Workshops were Regulations of the Podlasie Musical Meetings from 1998, which envisaged one lesson for a participant every day with one of lecturers, in the system of three cycles including three classes (ABC+ABC+ABC) as well as the assignment of every participant’s repertoire to the lecturers. This program is maintained and in practice means, that if the participant works at the Workshops with the repertoire containing for example works of Bach, Beethoven and Chopin, the first day has a lesson with lecturer A devoted to the work of Bach, on the second day has lesson with lecturer B devoted to the work of Beethoven and on the third day has a lesson with lecturer C devoted to the work of Chopin. This cycle is repeated twice more (together – three times) to give a total of nine lessons, three from each lecturer on three pieces from participant’s repertoire. Two days breaks between lessons with the same lecturer on the same piece give participant a chance to much needed practice on the piece in order to prepare it for the next lesson.

In the timeframe of the first four courses not until in the 2nd Warsaw Piano Workshop in 2001 the final shape of its program fully crystallized. According to the Workshop’s program, the main focus is dispatched to knowledge acquired from the way of work on the new repertoire. So the purpose of the Workshop is an intensive work on at least three positions of new repertoire under three different lecturers implementing a participant into the new academic year. The repertoire doesn’t have to be memorized, should be just read and prepared to be played in relatively smooth, middle tempo. Repertoire allocation between lecturers can be suggested by participant’s regular teacher or by a participant itself, however the final decision is made by the Faculty (the Workshop Teaching Board) and the Workshop Director.

In general, the course envisages 9 lessons 40 minutes each, three with every lecturer, devoted to at least three chosen positions of the repertoire. The repertoire assignment is decided in negotiations within the Faculty under supervision of the Workshop Director and takes place on the Workshop’s Opening Ceremony. Apart of an intensive, 9-lessons system of work with their repertoire participants usually are offered an additional lecture (eventually with open masterclass) given by a guest lecturer, as well as have possibility to perform at the final concert. Because of intensity of work Workshop’s concerts in principle have been limited to one performance of every participant at the end of the course. Additionally – according to assumption of work on the new repertoire – this performance is not obligatory as well as composition to be performed can be freely chosen be the participant. The choice can include previously prepared pieces, that don’t have to be worked upon in the Workshop. It is because work on a composition to be performed during final concert shouldn’t disturb work on new positions of repertoire.

Looking back into experiences of other courses it comes out, that perspective to perform many compositions at concerts, which simply must be prepared earlier, concentrates all the energy of participant and seriously interferes with work on new repertoire. The fundamental didactic assumption of the Warsaw Piano Workshop forms a thesis, that the real development is possible by creating the NEW, not by „grinding”, changing or even repairing the OLD. Such thesis constitutes program of the course. Therefore it is important to consider that the easiest for a student is to get to know the approach, a way of thinking and aesthetics of the lecturer while working on a new musical work with him. In consideration to that the Warsaw Piano Workshop gives every participant a chance to absorb knowledge from three lecturers. Because of that the benefit of participation in the course is even bigger. Such benefit of working with three lecturers on different pieces with each of them has two additional reasons.

The first reason applies to “working conditions” of the lecturer. In case of dealing with the new repertoire a lecturer is much less exposed to appearing dilemmas, connected with possible serious divergences between his own interpretation of the work and interpretation suggested earlier and drawn up already by the regular teacher. Awareness of „clean field” and a possible wide range of activities as its consequence extremely facilitates the work of lecturer. It also helps him to present his concept and supports his choice of the order of problem solving. It is of great importance also for the student. 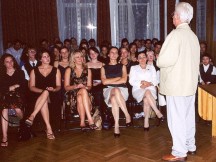 The second reason applies to the student’s yearly plan of work. From the students’ point of view the work on new compositions is advantageous due to the time in which the Warsaw Piano Workshop is scheduled. Many prestigious piano courses are planned for the end of June and the beginning of July, that means for the period immediately following the end of the school year, when the repertoire is done, buttoned up and tested on the exams. Correcting and changing interpretation of such repertoire seems to be risky for a simple reason – due to eventual possibility of divergence of doctrines and danger of teachers’ hierarchization, automatically carried out by the student. For this reason – constituting the greatest danger of participation in courses – the Warsaw Piano Workshops deliberately takes place in late August, in the period just before start of new academic year, when students start their work on new repertoire.

In REPERTOIRE page of this web site are the links to PDF files presenting program of the Workshop – participants’ repertoire assignments to the lecturers since 11th Workshop in 2010 till the present edition are available. Lecturer Assignments are decided upon just after receive of all applications, and published at the day of Workshop’s opening. Repertoire assignments of ongoing Workshop are published soon after work starts, usually on the third day of the course.