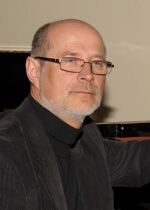 Has graduated with distinction from the State School of Music in Bielsko-Biala in the class of Maria Niedziela. He is an absolvent of the Academy of Music in Katowice under the guidance of prof. Czesław Stańczyk i prof. Józef Stompel.

After studies has started his pedagogical activity at the State School of Music in Bielsko-Biala, where since 1990 is a manager of the Piano Department. Since 2003 cooperates with the Self-governing School of Music 2nd Degree in Żywiec as well.

Has participated in jury panels of auditions as well as regional and Polish piano competitions. Has performed as a soloist and chamber player in Poland and abroad, has made archive recordings for Polish Radio. He was an initiator and the main organizer of six editions of the Polish Piano Competition for children and youth in Bielsko-Biala between 1995 and 2000 as well as the Polish Festival for Young Pianists in Bielsko-Biala (2001). Between 2002 and 2005 was an assistant lecturer at the Beskidy Piano Workshop in Rycerka Górna, since 2005 until now cooperates with the Warsaw Piano Workshop. He is member of the European Piano Teachers Association (EPTA-Poland), between 2006 and 2013 performed function of its vice-president. There are several dozen laureates of regional, Polish and international piano compeitions within his pedagogical achievements.

Graduates from his class, which have continued their piano studies and concert activity, have won first prizes at musical competitions in New York, Paris and Osaka.

Adam Podrez has been awarded many times for his pedagogical activity – twice by an Award of the Artistic Education Centre, the Silver Cross of Merit (2005), the Medal of the National Education Commission (2015) and by an Award of the Leopold Kronenberg Foundation for contemporary music popularization (2001).